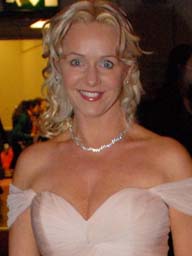 Loraine Barry was born in Dublin Ireland, and found her passion for Dance at 6 years old. Loraine began to dance competitively at 19 years old with her partner Andrew Sinkinson. Together Andrew and Loraine won many Amateur titles such as British Youth Amateur Ballroom, and won the Amateur British Ballroom three times- 1987, 1988, & 1989. Loraine & Andrew traveled around the world competing regularly and winning Grand Slam titles such as: the UK Championship, European Open Championship and World Championship. After winning the Blackpool Open Amateur Competition Loraine and Andrew decided to turn Professional in 1989.

In 1990 they competed for the first time professionally at the Professional British Open and won the Slow Foxtrot over Marcus & Karen Hilton, and John Wood & Anne Lewis. This was quite an outstanding result for their first British Open Competition. Loraine and Andrew were very successful together touring around the world and teaching as new professionals. In 1993 Loraine and Andrew sadly ended their partnership. It was then that Loraine took up a partnership with Luca Baricchi, which was very successful. Winning such titles as British Open three times 1999, 2000, & 2001, all Grand Slam titles including the UK Championship, International Championship, European, and Japan Open Championship. Loraine has also been awarded the Prince Mikasa Award, BDF Award, and Carl Alan Award.

Loraine now owns a studio in America which is run by her sister Michelle Barry and herself. She is busy touring the world and sharing her knowledge and developing the dancing. Loraine loves lectures as it is a wonderful opportunity for her to share her knowledge and experience. She is excited to do the same for this Magazine, and looks forward to offering her constructive comments, and criticisms to help, support and encourage the great dancers of today.

We are proud to have Loraine participate in Preciosa Invitational Coaching Series.