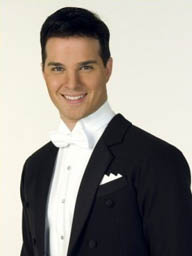 His partner for Season 6 was Monica Seles. They scored 15 for the Foxtrot and 15 for the Mambo. This is the lowest judge’s score of the season as of March 25, 2008. Roberts and Seles were one of the first two couples eliminated from the competition. His wife Anna Trebunskaya was sick during her week 3 practice, and a video of Jonathan dancing and teaching her partner, Steve Guttenberg was shown. After this, for the encore performance, he and Guttenberg were asked to do the entire routine.

Jonathan returned for Season 8, and was partnered with pop singer Belinda Carlisle but they became the first couple eliminated, making this the second time that he was eliminated in the first Results Show. Despite being eliminated first, he & Belinda held a higher average than a few celebrities who lasted longer than them. Jonathan also returned for Season 9 of Dancing with the Stars and was paired with Grammy Award winning artist Macy Gray. The couple were the second pair to be voted off in the season’s first results show, making this the third time in a row Roberts was voted off after the first week, and making Jonathan the professional dancer on the show voted off first the most times (three times).