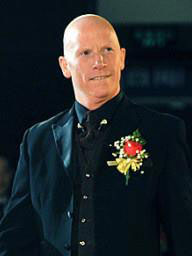 Graham began to dance at the age of eight when his mother took him to the local dancing school for his first Saturday afternoon class. After passing through the medallist system he began to enter the open competition scene at the age of thirteen, soon to become a regular competitor.

The highlight of the junior career was the winning of the International Championship at the Royal Albert Hall. Graham continued to work his way through the youth and amateur fields before deciding to take a break and concentrate his efforts on his teaching career. After a five-year period off the floor he decided to team up with Cara Stubbington in the professional field. Among their successes were being semi-finalists in the World Masters, Runners up in the United Kingdom and British Rising Star Championships and winning the United Kingdom Closed Professional Latin Championship.

Since retiring from competitions Graham now dedicates himself to the training of Ballroom and Latin American competitors both at home at the famous Dance Options Studio and all over the world.

Having been an active member of the Imperial Society of Teachers of Dancing since first qualifying in 1988, he was asked to join the Latin American Faculty as an invited member in 2000 and became a full member later the same year.